Australia has a long-held tradition of making Big Things into attractions. Maybe it’s got something to do with being a big country and having all that space to fill!

Whatever the reason, north Queensland has embraced the tradition. Up here we do Big Things in a, err big way.

Some like the Big Peanut with its silly grin and top hat are endearingly cute. Others are quirky and come with heartfelt intentions such as the Big Lizard sculpture at Jabiru Wetlands. Others still are captivating clunkers like Capt James Cook complete with advertising banner for a tavern.

But not all Big Things are cringe-worthy kitsch. The Big Wet makes our list thanks to its influence on Big Waterfalls while dust storm-creating Big Trucks are a part of everyday life in the outback and Gulf Savannah.

At a staggering 8.64m the Big Croc represents a life sized replica of the largest croc ever taken. ‘Krys’ was shot on the banks of the Norman River by Krystina Pawlowska in the 1950’s. As one half of a husband & wife croc shooting team, Krystina enjoyed her reputation as a shooter who wore jungle greens and red lipstick, quipping that ‘it’s good to catch a glint of nail polish as I pull the trigger’.
Find the Big Croc in downtown Normanton 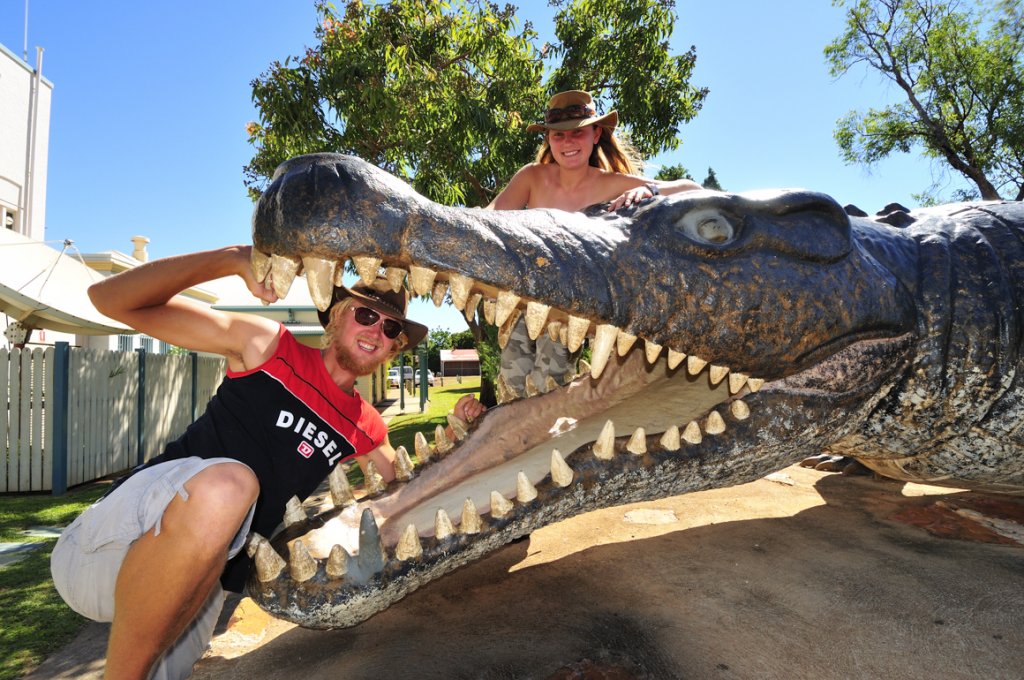 Oh James what have we done to you? You are revered globally as one of the world’s greatest navigators, showing extraordinary courage and intelligence to navigate through an uncharted Great Barrier Reef. In reply we honour you with an oversized faded monolith branded with advertising and seemingly directing traffic on the highway that bears your name. Please forgive us.
Find the Big Cook on Captain Cook Highway, Cairns 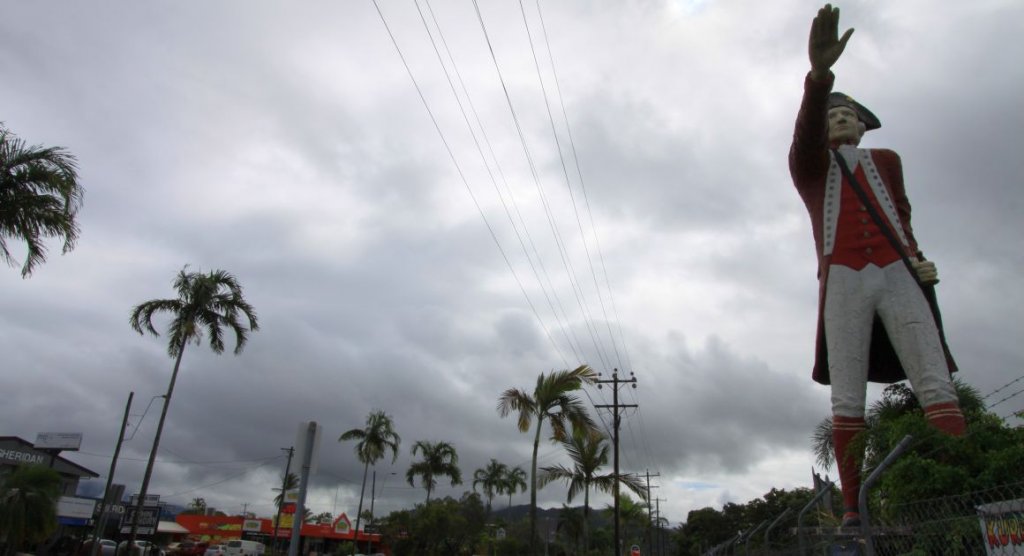 Not quite so big Captain Cook

This is more like it – a suitably respectful monument to the great Cook. Not far from the Endeavour River beach at Cooktown where Cook beached his holed barquentine HMB Endeavour is an appropriate tribute for a revered navigator, sailor and leader who charted much of the Great Barrier Reef.
Find the other Captain Cook on the foreshore at Cooktown 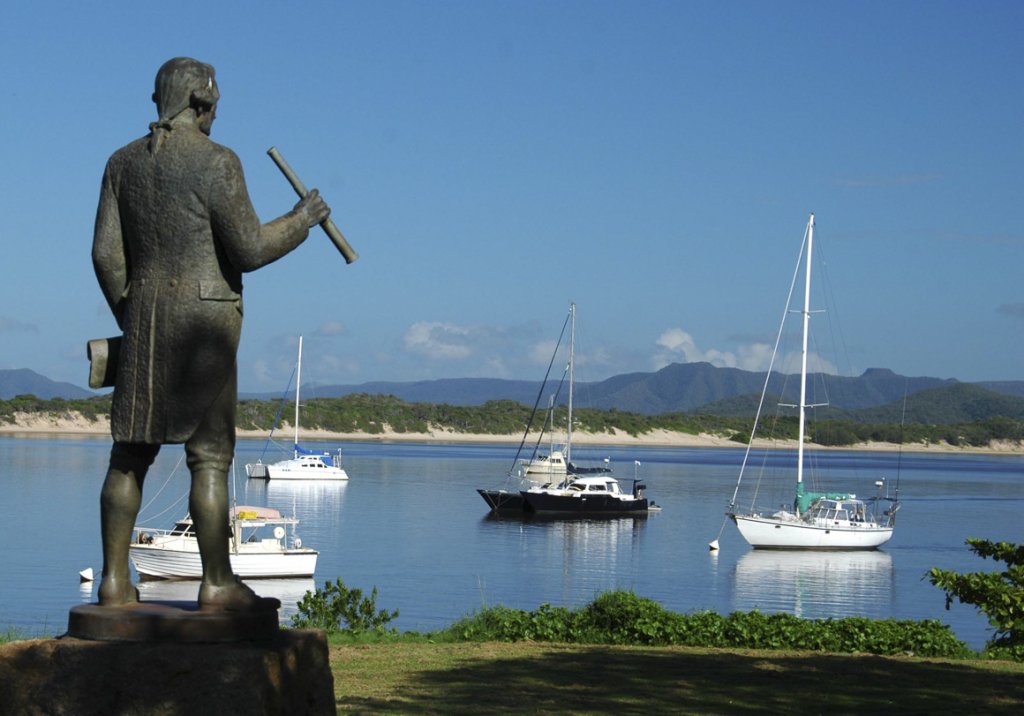 Nature kicks some serious butt in relation to tropical spiders like the Golden Orb. These colourful fellas are easily identified around Thala by their striking yellow markings. Sometimes known as Golden Orb Weavers, their striped legs are made for weaving as their tips point outwards. Webs may be up to a metre in diameter.
Find Golden Orbs in the forest at Thala – ask one of our onsite Rangers and they’ll show you one!

Australia’s second largest flightless bird (after the emu) is on the brink of extinction. Let’s hope that this concrete tribute is not all that remains for the next generation of the rainforest’s most important propagator.
Find the Big Cassowary at the Cassowary Shopping Centre, Wongaling Beach

We’re not quite sure of the significance of the top hat and bow tie adorning the Big Peanut on the Atherton Tablelands. But it might have something to do with brightening up the peanuts boring beige and adding a touch of sophistication to an otherwise little regarded nut.
Find the Big Peanut at he Peanut Place on the Kennedy Highway, Tolga

Big wheel nuts this one’s for you. Any guesses how many tyres a triple road train may use? Try 40 or more. Known fondly as the kings of the outback, a triple road train consists of one prime mover and three trailers, transporting anything from livestock, freight, fuel or minerals. They’re seriously big vehicles!
Find Big Trucks when driving the Savannah Way 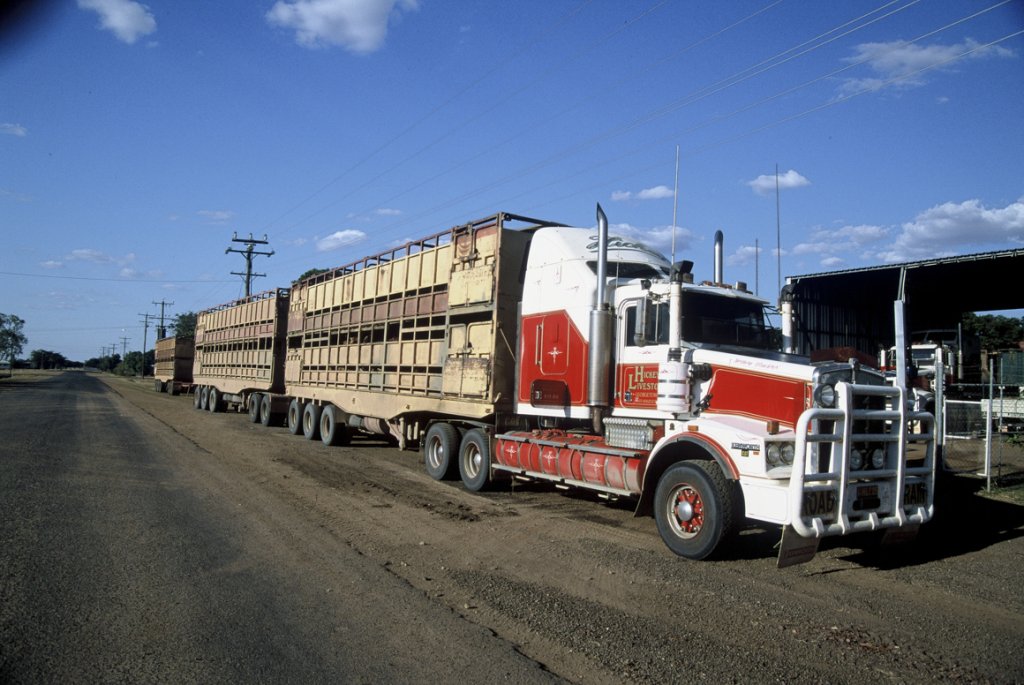 An annual event that begins any time from December to around March, the Big Wet creates seriously Big Waterfalls. One of the best, the Barron Falls in full flood rivals Niagra Falls for pure spectacle. Ok, maybe we’re a little biased but there’s enough power generated by the Barron Falls to generate electricity via a hydro power station.
Find the Barron Falls at Kuranda or see them from Kuranda Scenic Rail or Skyrail Rainforest Cableway

The Curtain Fig Tree is another monster unique to TNQ. It’s almost a reverse tree in that it grows from the top down rather than from the earth upwards. The Big Curtain Fig is actually a strangler fig species. It attaches itself to a healthy host tree, eventually killing it by sending extensive aerial roots downwards to form a significant curtain. This is nature in all her kick-butt glory.
Find the Curtain Fig Tree just outside Yungaburra on the Atherton Tablelands

Is it a barramundi? Or some other species? We’re not certain, but whatever it is we like it! Like a fish out of water this fella finds himself well inland and almost 1,000 metres above sea level, representing a big challenge for fresh water anglers. Anglers chase barra while others enjoy the tranquillity of rolling hills of the Atherton Tablelands.
Find the Big Fish on the Millaa Millaa-Malanda Rd

Have you found any other Big Things in your travels through north Queensland? Share your photos on our Facebook page