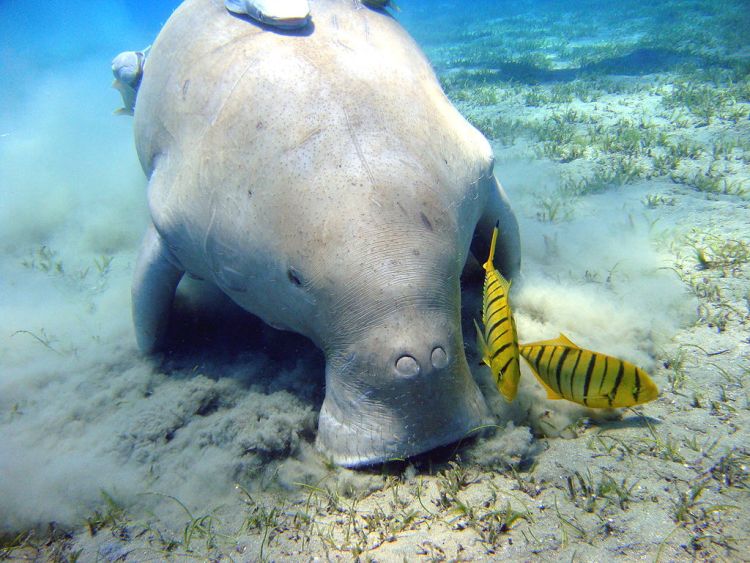 Known as the mermaid of the sea, dugongs (or manatees) are shy bashful creatures. The jury is still out on how or why dugongs were mistaken for mermaids, but stories abound of sailors sighting graceful half woman, half fish creatures as early as Christopher Columbus’s explorations during 1493. Perhaps the combination of lonely sailors and rum consumed on extended sea voyages gets closer to the truth.

Using their tail fluke for propulsion, their rotund bodies make them appear sluggish yet graceful. With big squarish snouts dominating their head, dugongs look kind of goofy. Regardless, it is rather special if you’re lucky enough to spot one. Guests on our Nature Walk have been extremely lucky with dugong sightings from the lookout spots on Thala’s walking tracks.

Ranger Brett, who has been with Thala Beach Nature Reserve since the resorts’ beginning, still gets excited about recent dugong sightings. “It’s been a while since we’ve seen dugongs in so close to the point at the northern end of the beach,” he says.

“From the lookout we saw them foraging amongst the sea grass beds in the shallow water. We often see turtles from this spot but it’s a rare treat to see dugongs during nature walks,” Brett enthused.

Herbivores who forage in wide shallow bays, mangrove channels and in sheltered waters of inshore islands (though they’ve also been occasionally spotted in deep water), dugongs don’t have terribly good eyesight. They rely on sensitive bristles (that look a lot like whiskers) on their upper lips to forage for seagrass and tiny sea squirts (macro invertebrates) when feeding. No lightweight, these marine mammals can weigh up to 400 kg and reach three metres in length. They communicate with each other with a sort of ‘chirping’ sound.

Slow breeders who may produce a calf once every three to five years, dugongs can live up to around 70 years. Their slow breeding rate means they’re somewhat vulnerable, particularly if their food source is threatened. An adult will eat approximately 30 kg of seagrass each day, snorting it off the seabed like a giant vacuum cleaner.

While it may appear that dugongs destroy their own feeding grounds with rampant foraging, pulling out seagrass actually aerates the seabed, encouraging further growth. So they are actually helping to reproduce their own food each time they eat. Now that’s clever!