One of the many striking, yet rather unusual looking inhabitants of the Great Barrier Reef is the Maori Wrasse. This bone headed bather contains two delightful features that don’t serve it well in the survival of the fittest. It’s a very personable fish that has been sought after for its tasty qualities. 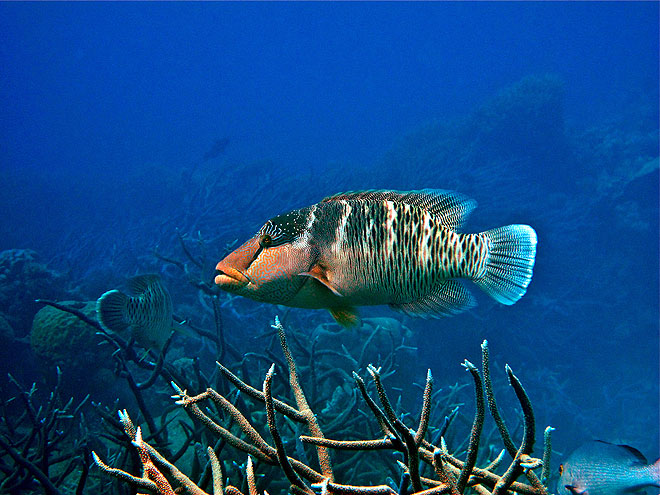 However, more than just a good meal, the Maori Wrasse serves to protect the environment, as it eats sea hares, boxfish, or the crown of thorns star fish that attacks the reef.

The largest member of the family Labridae, this wrasse reaches up to six feet long in the male species, and up to three feet in females. Its unusual appearance consists of thick, fleshy lips, and a rather protruding lump that appears above its eyes that becomes more pronounced during the fish’s twilight years.

The colours of the Maori Wrasse range from a bright electric blue, to a green purplish blue in the males and a red orange colour in juveniles and females.

The behaviour of the Maori Wrasse

Adult wrasses can be found on reef slopes and lagoon reefs that range from one to one hundred metres in depth. The juvenile wrasse tends to prefer hiding in dense coral and seagrass areas. Besides eating the reef’s arch enemies, this Maori Wrasse snacks on a variety of crustaceans, mollusks and gastropods, particularly fish and echidnoderms.

Most commonly seen in solitary male-female pairs, this wrasse can be considered somewhat of a romantic. Although less common, the wrasse has been reported scouting the reef environment in numbers up to seven.

The sexual maturity of the Maori Wrasse is reached at about five to seven years. Interestingly, the subspecies Humphead wrasse is protogynous hermaphrodites, meaning they can turn into males at approximately nine years of age. Generally, female wrasses are known to live to about 30 years of age, while the male species fall short, with a life expectancy of 25 years.

Information on wrasse hotspots and tours that can show you these big hearted reef guardians can be found at Thala Beach Lodge.

This footage of Chris “Fluffy” Jones photographing the adult male Maori Wrasse at North Opal Reef, Great Barrier Reef gives you an idea of the fish’s size and friendliness.