A colourful species endemic to the coastal region of Far North Queensland, the Orange thighed-Frog is adorned with a lime green dorsal, bright yellow feet and a yellow underside. Large golden irises protrude from its flat head, while its signature bright orange thighs distinguish it from others of its kind.

Dwelling largely in rainforest canopies, the Orange-thighed Frog often only descends when it’s time to breed. However, it’s not uncommon to spot this citrus coloured amphibian hopping within the grounds of Thala, particularly after periods of heavy rain. 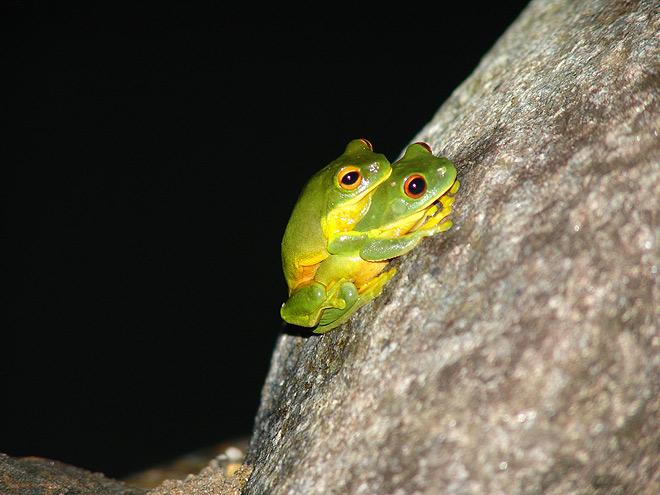 It’s during the rainy season that the frog likes to breed, with the males congregating around still ponds to call out to the females, often in a chorus, which can continue well into the night. After successful copulation, the female will lay anything from 800 – 1600 eggs in shallow water. When they hatch, the tadpoles appear almost identical to the close relative, the Red-eyed Tree Frog.

Other distinguishing characteristics of the Orange-thighed Frog are that its forelimb toes are three-quarters webbed, while its hindlimb toes are fully webbed. It also produces a long moaning “aaa-rk” sound, followed by a soft trill.

While restricted to a confined area, this tangerine tree-dweller is believed to number around 50,000, with its population suspected to be stable or even increasing. The total area inhabited by the Orange-thighed Frog is believed to be about the size of Tasmania, or 1% of Australia’s mainland.