A colourful addition to the treetops of Far North Queensland is the rainbow lorikeet. Possessing a stunning chromatic plumage in the form of a deep-blue head, bright-green wings, tail, back, and a yellow-rump and thighs, the lorikeet’s vibrant hues light up the rainforest surrounds. Rainbow Lorikeets are common visitors to the treetops surrounding Osprey’s Restaurant at Thala where their colourful display and boisterous attitude provides amusing entertainment for diners. 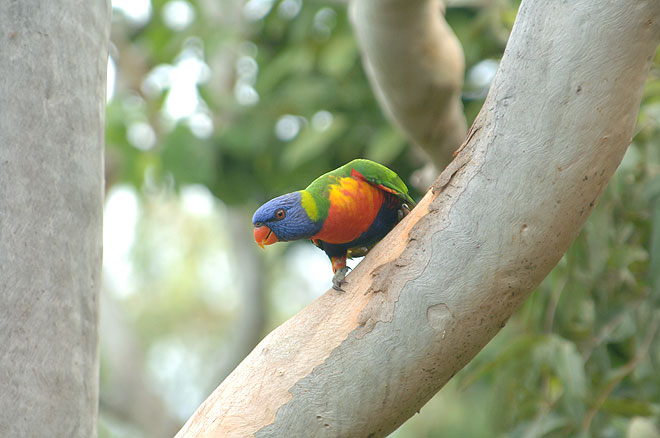 Also found in Indonesia, Papua New Guinea, New Caledonia, the Soloman Islands and Vanuatu, the rainbow lorikeet clings to its favourite habitat of rainforest, coastal bush and woodland areas. In Australia, this bright, nectar loving creature is found along the southern and eastern coastline, from SA up to north QLD.

A medium sized bird from the parrot family, the rainbow lorikeet is difficult to distinguish between the sexes merely by sight. Juvenilles, however, possess a black beak which gradually turns to a bright-orange upon entering adult hood – a beacon of maturity. Interestingly, they also have a tongue with a papillate appendage, which is adapted to extract pollen and nectar from flowers.

Apart from pollen and nectar, the rainbow lorikeet will consume fruit such as papaya, mangoes and apples. And due to their often frequent contact with humans, this florid flyer can be hand-fed in many places, particularly in gardens, campsites and sanctuaries. However, care must be take to feed the bird appropriately, as processed foods can negatively affect their plumage.

Concerning their behaviour, the rainbow lorikeet likes to travel in pairs, and may occasionally respond to a flock’s call to fly in unison before retreating again to their intimate formations. Their breeding time in Australia is from September through to December, when they’ll nest in tall tree hollows, trunks or overhanging rocks. Interestingly, the bird will also spiritedly defend its nesting areas against brutes such as the noisy miner bird and the magpie.

Fortunately for guests at Thala’s Ospreys Restaurant, these handsome birds can often be spotted in the adjacent treetops during breakfast time, as here they like to feed off the nectar in the morning light.