Thala Beach Nature Reserve first opened its doors over 2 decades ago in 1997 and since then has never closed. Open 24 hours a day 7 days a week Thala has hosted approximately over 600 000 guests and diners.

Now in its 22nd year of operation, Thala has taken a moment to look back at the vegetation on the land in its original state and compare it to present day. The positive results of Thala’s revegetation efforts are clearly noticeable.

Above: An aerial photograph taken in 1985 of the original degraded sugar cane plantation compared to a recent 2019 photograph where Thala Beach Nature Reserve currently operates. After 2 decades of revegetation and forest rehabilitation the increase in native vegetation is astounding.

Brett Kelly and David Anderson lead Thala’s environment team and have spearheaded Thala’s forest rehabilitation since the beginning of the resort’s journey.

“Where exotic weeds were extensively removed they were replanted with local natives. Lots of plants were propagated on-site with a preference for bird and butterfly host plants. This has significantly boosted observed bird species, our current bird species sighting list is around 194 and growing,” says Brett Kelly.

“Thala now has a markedly improved biosphere which has encouraged new populations of echidnas and increased numbers of spiders and native bees.”

Green Ant numbers have increased and have been used on occasion for wasp control for the last 15 years. According to Brett, “One good green ant nest will take out a wasp nest.”

Above: Thala Beach Nature Reserve is situated on a private headland between Cairns and Port Douglas, Australia.

The Vine Thicket Forest, seen clearly in the original 1985 photo along the beach front of the property, was the only original forested area on the land. This is a unique type of forest that only grows on a thin layer of compost. Once the forest is removed it rarely recovers. At Thala it was left in its natural state and preserved. Unfortunately, this fragile type of forest has been heavily cleared as a result of coastal development and expansion elsewhere.

In fact, this original Vine Thicket Forest only exists today because in the early 1970’s Rob Prettejohn was growing sugar cane on the property, which had a 1700 tonne assignment. One day he received a ‘Show Cause’ notice from the government to clear some 15 acres of rain forest behind the fore dunes. Rob refused to do so and as a consequence his cane assignment was reduced as a penalty. A poignant example of how public policy has evolved over the last 50 years.

Genuine local species of plants, some of which were propagated locally and some which were encouraged to flourish, were deliberately used in the forest rehabilitation, aiming to expand and enhance the fragile native forest while keeping it in a natural looking state.

Inspiration for the landscape design around the swimming pool was directly influenced by photographing and examining nearby creeks and waterfalls leading to unique native species being sourced, propagated on-site and planted. An approach ahead of its time.

The physical removal of weeds and over planting to outcompete weeds was a long term strategy Brett Kelly and his team used to combat invasive exotic plants, and it has paid off. Weed trees are now outnumbered by natives and no longer considered a threat. 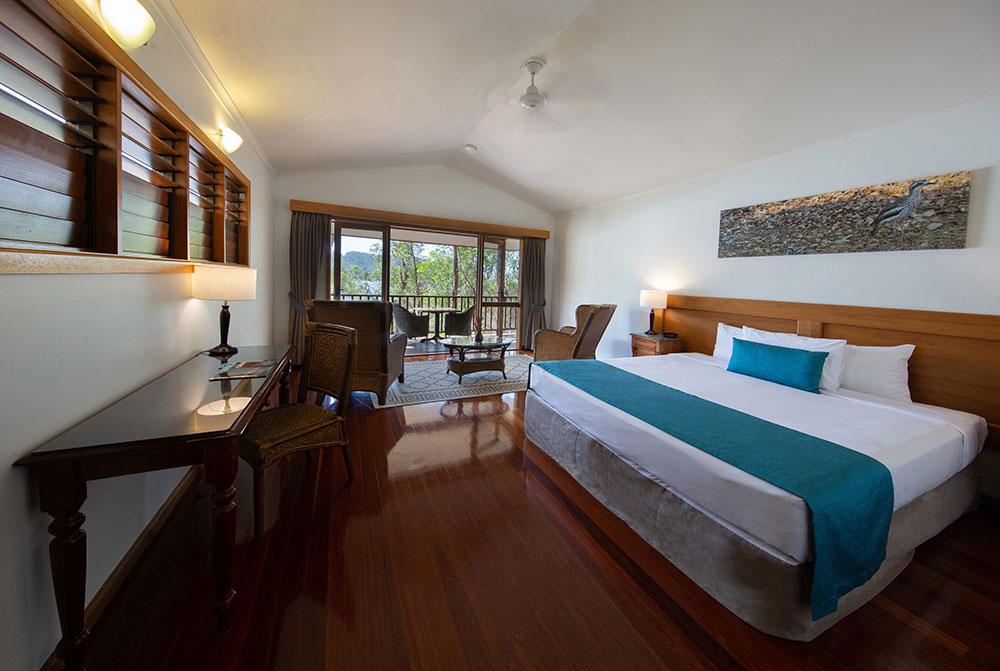 Hand in hand with Thala’s ongoing revegetation works is also an effort to reduce landfill by removing plastic bottles, straws and re-usable coffee cups from the property. Guests are now provided with a complimentary stainless steel water bottle upon check in and encouraged to re-fill it not only during their stay at Thala but also on their onward journey to other destinations. This change in behaviour not only saves 1000s of bottles and cups from entering landfill each year but also educates Thala’s guests, hopefully building a more eco-conscious traveller to take these ideas and inspiration with them when they depart.

A preference for local ingredients at Thala’s Osprey’s Restaurant has lowered food miles. On-site wastewater treatment, the sharing and acknowledgement of local indigenous culture, guest education, local employment, elimination of selected single use plastics, recycling and passive cooling incorporated into building design are all important aspects of eco tourism embraced at Thala. This approach has led to Thala being awarded the highest Advanced Eco Tourism accreditation from Eco Tourism Australia and granted membership to the National Geographic Unique Lodges of the World program, both of which have strict guidelines and auditing processes to adhere to.

Above: The main building at Thala Beach Nature Reserve embraces the surrounding forest with its tropical design and high ceilings.

The creators and owners of Thala Beach Nature Reserve, Rob and Oonagh Prettejohn are proud of how far their vision has come.

“Travelling, as pioneers, along our chosen path as eco-developers has rewarded us with a rich sense of achievement. We, since early childhood, have had an empathy for nature. And our vision embraces the use of scientific and husbandry principles to care for natural ecosystems, as well as creating and enhancing degraded environments. In such a way that people and the natural world both prosper and coexist. We are very proud of Thala Beach Nature Reserve and, I believe, it is the embodiment of this philosophy,” says Robert Prettejohn.

“Above all, we are very proud to be associated with our dedicated staff who have overwhelmingly embraced these principles and have created the Thala Beach Nature Reserve you can see and experience today.”

Thala Beach Nature Reserve is held in high esteem by many locals, travellers, nature lovers and organisations around the world.