The largest endemic butterfly in Australia, the Cairns Birdwing Butterfly has a wingspan of up to 18cm. Besides its proportional, pterodactyl-like reach, other conspicuous traits include its vivid colouration, particularly in the male, who’s wings contain vibrant splashes of emerald green. 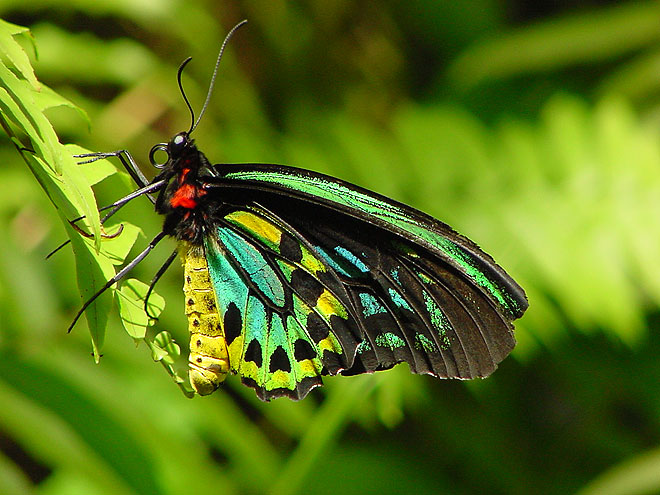 Found in north-eastern Australia, from Mackay to Cooktown, the Cairns Birdwing Butterfly’s favourite habitat is primary rainforest. However it will also subsist and breed within an urban garden given it contains the right variety of plants.

About this, the species is very particular, as when still a caterpillar the female will use chemical receptors in both her abdomen and legs to detect an especially tender leaf. And when undergoing its great metamorphosis into a butterfly, the creature does so in a cleverly camouflaged cocoon, which resembles a lifeless, dried up leaf.

Interestingly, once hatched, the Cairns Birdwing Butterfly has only four to five weeks of life. Given little time, the males are desperate and aggressive in propagating with a mate, and will often engage in morning patrols, competing with other males to find its flittering prize.

Even once a female is found, courtship can be lengthy and aggressive, taking up to 36 hours. Here the female sensibly slips the male a sedative to keep his behaviour in line. And so, after hours of intense, fascinating behaviour, the cycle begins anew.

Whilst the Cairns Birdwing Butterfly carefully chooses its place to pupate, or change into a butterfly, much of its native habitat was at one time cleared away, which greatly threatened its numbers. Further to this, the spread of exotic vines such as the Dutchman’s pipe, which is lethal to the butterfly’s larvae, threatened their survival.

Recently, however, programs to address these issues have helped the butterfly’s numbers return to normal. At present their status is not endangered.