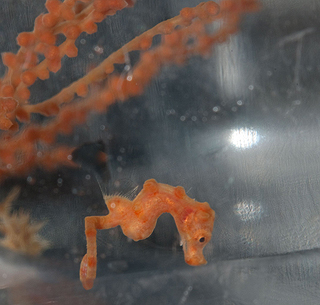 James Cook University scientists believe they have discovered a new species of Pygmy Seahorse on The Great Barrier Reef, Australia. The recent discovery comes after searching 100 metres beneath the surface 200 kilometres from Cairns, Australia.

At 5mm long the newly discovered Pygmy seahorse could be the world’s smallest vertebrate.

The expedition was lead by Tom Bridge from James Cook University. “As you go deeper and deeper, you find less familiar critters,” Mr Bridge said.  “Pygmy seahorses have been discovered before, but I’ve never seen one quite that small before and no one has ever recovered one from quite that deep either.”